The Future of Divi

As you might know, Divi has always been my favorite page builder. However, there are a lot of other builders out there, and some of those have some cool features that Divi doesn’t have yet. Normally, Elegant Themes, the company behind Divi, doesn’t disclose their plans for the future, but in the past few weeks, Nick Roach, founder and CEO of Elegant Themes, did share some of their plans for Divi 🙂 So let’s talk about what updates and features we can expect from the most popular WordPress theme ever in the near future!

Buy or upgrade Divi during the Cyber Monday Sale and get 25% off!

Have you been doubting to buy Divi or upgrade your subscription to the lifetime licence? Then this is your chance! Click on the button below and claim the highest Divi discount ever before it's gone! And as if that's not enough, they're giving away amazing bonuses like lifetime licences for plugins that normally go for hundreds of dollars! 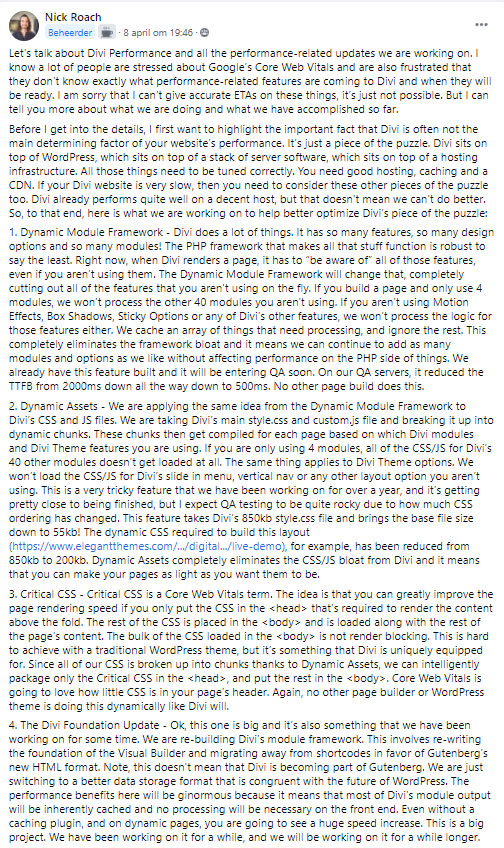 If you’re a bit serious about SEO, you’ve probably heard about the upcoming Google Core Web Vitals update. That basically means Google is going to take the speed of a website into account to determine its position in the search results. They do that because they want the websites that offer the best user experience at the top of the search results, and nobody likes a slow website.

Divi has a bad reputation when it comes to speed; it’s known to be quite slow and scores bad in speed tests. Nick pointed out that Divi’s poor performance also has to do with other things like cheap hosting and the lack of caching – which is true, but I and others have tested Divi against other themes and builders on the same hosting, with the same caching and other plugins, and those tests show that Divi is often a lot slower than others.

One of the main reasons for that is the large number of features and modules in Divi, that all have to be loaded on every page. However, on most pages, only a few of those features and modules are used. For example, on this page, I only use about 4 modules: text, image, video and menu. But still, the code for the 40+ modules I don’t use is loaded as well…

That also goes for the code that’s needed for things like box shadow, animations, sticky options, and not to mention WooCommerce… all really cool features, but not needed on most websites.

Loading code that’s not needed on the page is called bloat, and Divi has a lot of that…
Thankfully, that’s all about to change!

On April 8th, Nick announced a number of upcoming speed and performance updates for Divi they’re working on, which should be released in the next few weeks to months.

The first update we can expect is called “Dynamic Module Framework”. That update will solve the problem described above; Divi will be able to see which modules and features that are used on a certain page, and will only load the code that’s needed for those modules – thus not the code that’s needed for those other 40 modules. The same goes for features; if you don’t use box shadows, animations of sticky options, the code for that won’t be loaded.

The next update is in line with this, and called “Dynamic Assets”. That means they’re taking the main CSS and JS file from Divi and cutting it up in small chunks, so they can only load the CSS and JS that’s necessary for the modules and features you’re using on any given page.

When this update is live, Elegant Themes can add as many modules and features as they want to Divi – if you don’t use them, they won’t slow down your website. No more bloat!

Next, there will be a Critical CSS update. That means only the CSS code that’s needed for the content a user sees immediately (above the fold content) is loaded at first, and the CSS for the rest of the page will not be loaded until the rest of the page is rendered. That way, the CSS code isn’t render blocking anymore, which will make your site pass another Google PageSpeed test.

The last speed update that’s in the works for Divi is a big one. At the moment, Divi uses shortcodes to build a layout. If you deactivate Divi, those shortcodes will become visible all through your content. Now that’s not as big of a problem as some would have you believe; a simple $20 plugin will remove all those shortcodes for you with a click of a button.

However, shortcodes also aren’t the most efficient way to render content, so Divi is switching to the same HTML format Gutenberg uses (the native WordPress page builder).
That doesn’t mean Divi will be part of – or depending on – Gutenberg, it’s just a better and future proof way of storing data, which will bring a huge performance boost too.

As you can imagine, this last one will take a while. Not in the last place because Divi powers millions of websites, that will all have to be transitioned to the new format.
There will be an automated tool for that, but the testing process for that will take a really long time because they want to make sure they won’t break any websites.

According to Nick, all of these speed improvements will take Divi from being one of the slowest builders at the moment to become one of the fastest builders soon!

Most premium theme builders – including Divi – have offered a WooCommerce builder for a while now. But with most of those builders, you can only build your own custom product pages. For other WooCommerce pages, like the cart and checkout, you’re still stuck with the default WooCommerce pages.

That’s all about to change for Divi users 🙂 They’re close to releasing a new version of their WooCommerce builder, that offers new modules to build your cart and checkout pages exactly the way you want to!

Nick talked about this in the 200th episode of Divi Chat, a weekly talkshow about Divi on YouTube.
And he mentioned a few other things there as well…

This is a cool feature too, which some other builders (and Divi plugins) already offer; you will be able to show or hide certain content based on certain conditions. Nick mentioned some examples, like displaying a sale banner during a certain period or showing a certain section only to logged-in users with a certain user role, so you can build a membership site. And there are a lot more possibilities, as the premium Hide & Show Pro plugin already proves.

Access all theme parts from within the page builder

Right now, if you want to edit parts like your header or footer, you’ll have to leave the page you’re working on, go to the theme builder in the backend, find out which template you need to edit.. in the near future, you’ll just be able to access every part you see from right there, so you won’t even have to leave the current page anymore!

Nick also mentioned there will be more icons in Divi soon, and a way to filter / search those icons. He said they will probably use an existing icon library, which I expect to be
Font Awesome and/or Google’s Material Icons since they are the most used libraries and they’re already included in some other builders.

Next, he talked about some more design options, like background masks (which will allow you to add shapes to your backgrounds), background patterns and better gradients (more than just 2 colors with adjustable stops).

Nick made it clear their focus is 100% on Divi for the foreseeable future, so we shouldn’t expect new plugins or themes anytime soon.

So there are some exiting things coming to Divi 🙂 Nick said most of the above should be ready in the next 1 to 3 months, but I’d advise you to take that timeline with a grain of salt –
or a whole can 😉 Divi isn’t exactly known for their speedy updates. That’s to be expected when your software runs on millions of websites, all with different server configurations and different plugins. The last thing you want is thousands of websites breaking because you released something too fast.

Anyway, us Divi fans have something to look forward too!

Let me know what you think about these updates, or what you would like to see in a future version of Divi, in the comments below!

This article is written by Bob the webbuilder, an allround website expert who blogs regularly about all kinds of subject to help you build your website. Do you need help?
Hire Bob to build your website or improve your existing website.

Get a free quote now!

This article contains affiliate links. That means I get a compensation when you Divi after clicking one of the links on this page. The price you pay is still the same so it won’t cost you anything – in fact, you’ll get 10% off! – but it will help me to help you with these kind of free articles.

So if you’re going to buy Divi, I would really appreciate it if you use this link 🙂

Do you already own a Divi licence, but still want to help me out? Then I would really appreciate it if you would make a small, one time donation via the button on the right 🙂